The project took a backseat during the pandemic, with each member seeming to embark on a myriad of lockdown solo projects.

Adrianne Lenker released two different albums, for example – but each return to the fold on this new album.

Incoming on 4AD, ‘Dragon New Warm Mountain I Believe In You’ will be released on February 11th.

Adrianne comments: “One of the things that bonds us together as a band is pure magic. I think we all have the same guide and none of us have ever spoken what it is because we couldn’t name it, but somehow, we are all going for the same thing, and when we hit it… we all know it’s it, but none of us to this day, or maybe ever, will be able to articulate in words what the ‘it’ is. Something about it is magic to me.”

Early self-produced sessions were followed by a stint in Topanga Canyon alongside Shawn Everett, resulting in different flavours and hues.

Max Oleartchik offers an update: “Well it’s like, we’re a band, we talk, we have different dynamics, we do the breaths, and then we go on stage and suddenly it feels like we are now on a dragon. And we can’t really talk because we have to steer this dragon.”

New single ‘Time Escaping’ is online now, and it’s a fine, enriching return – bold in its execution, it neatly leads Big Thief into a fresh chapter. 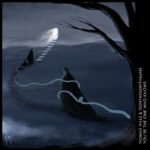